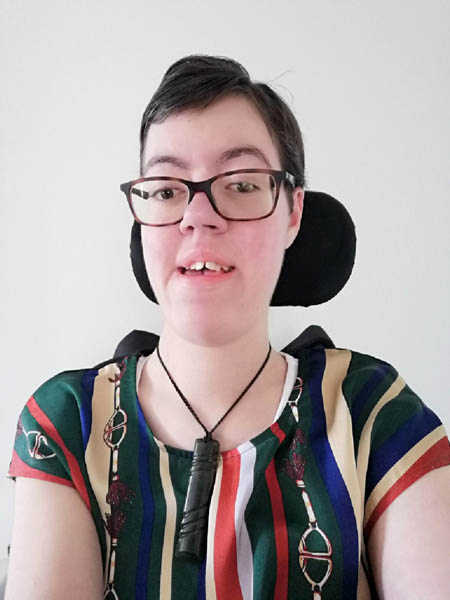 Kim was born with a condition called Centronuclear Myopathy that causes muscle weakness. As Kim, grew her muscles did not get stronger, and at the age of 11 she could no longer walk and started life in wheelchair full time.

Kim was blessed to have parents who did not place any limitations on what she could and could not do and she was raised exactly the same as her brothers and sisters.

She has three older siblings; two sisters and a brother and has grown up and spent her life in Manurewa.

Her Dad is Pākēha and her Mum is Ngapuhi/European from Kaikohe.

Kim says she initially wanted to be an accountant, like her father so she took business subjects economics and statistics at school.

She then went to MIT and completed a degree in accounting. During the last year of her degree, Kim completed a placement with a company but found it difficult as they were not well set up to support her, the building was inaccessible and there was a train journey to get there which was difficult to manage.

While completing her degree in Applied Management, Kim did two research papers, they were both about accessibility. Her first piece of research was about accessibility at MIT. Kim had experienced the limitations personally, such as access through doorways. The doors had to either be pushed or pulled open which was not possible for someone in a wheelchair. As a disability representative and as a result of her research, Kim managed to have the doors changed and they were finally adapted as a result of her efforts.

Kim says: When it comes to disability, for me, I never say “I’m disabled”. I despise that term because the term itself is so limiting. When I speak, I purposely say “I have a condition called..”, “I have an impairment..”, “people with impairments..”. For me, “disability” is just a negative label. If someone tells you they’re disabled your thoughts aren’t going to be “they can achieve anything” it’s more likely going to be the opposite.”

After graduating, Kim did not go immediately go into a role, and spent some time making crochet hats and selling them. Then an acquaintance told her about TupuToa who found her a placement at ACC in Manukau. She says ACC was really well set up for her, with accessibility and support.  Amongst a few things she has a standing desk to work with the height of her wheelchair, and she has great colleagues as well.

Achievements that Kim is proud of includes a blog she writes called Joyful Always and public speaking. She has given a sermon at her church to a congregation of 400 people. She has also spoken at a number of conferences.

In her blog, Kim says:

“ One of my biggest dreams is to live in a world where all people with impairments are seen as having potential. To live in a world where no one is discounted because of their abilities or inabilities. If I will do anything in this world it will be to work towards changing people’s perspectives so that when people see an impaired person they would see what they can do before what they can’t do.”

Kim says her biggest challenge in life has been other people and their perceptions about her. People can put barriers in the way. She is very grateful that her parents never put limitations on her and have always been her ‘cheer leaders.’

Kim also says her Christian faith is a huge source of strength for her in all areas of her life.

As a TupuToa intern, Kim carried worked at ACC as a recovery administrator and has now been offered a full-time role in the position. She is part of a team of people working on ACC claims, and works allocating them to case managers. She enjoys the role and prefers it to accounting.

Kim says she does not have a special goal in life other than to go with the flow, but after living on benefits all her life, she is really enjoying working in a full-time paid role.