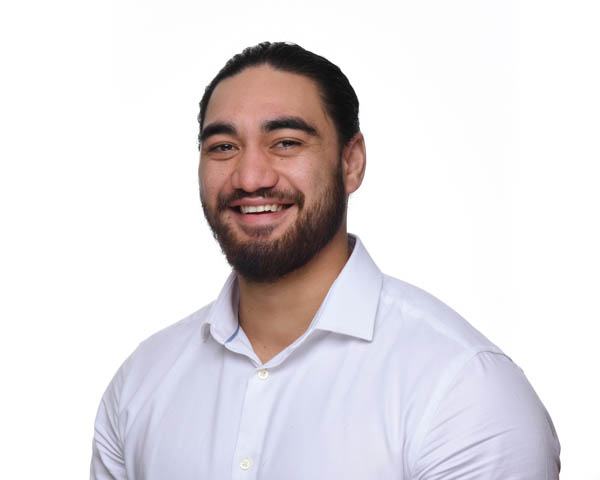 Monsul was born and bred in Gisborne. He identifies closely with his whakapapa on his Mum’s side to Te Whanau a Kai and Te Aitanga a Māhaki. His father is from Ngāti Porou and Te Horo marae further up the East Coast.

He had the great privilege to be brought up in the family home with his Mum, his Nan and his grandfather, just 30 metres away from Takitimu marae, and in sight of the urupa where his grandparents are buried.

He thought the family home was a small place, but when he came to architecture school in Auckland and went through an exercise drawing his house he realised how large it was. He encountered many challenges on his journey from small town New Zealand to Auckland. He remembers it was strange for him growing up with around 18 cousins in his neighbourhood not to be dropping in to visit different homes all the time, and he didn’t sleep at all on his first night in the city as he was staying close to a motorway and had never heard the sound of constant traffic before!

Monsul says he ended up pursuing architecture as a career on the advice of his uncle who was a builder. Originally he wanted to be a builder too, but his uncle said he should become an architect so he could do a better job of design than many of the architects his uncle had worked. He had been constantly frustrated at how always overcomplicated things and drew up designs that weren’t practical to build. Monsul had always enjoyed art at school as well, but it was an incident with a high school career advisor that made him really determined to study architecture. The advisor doubted whether he could make it, despite the fact he had been top in his class for graphics. He wonders how many students would have been put off pursuing their dreams by his attitude.

When Monsul first moved to Auckland, it was quite a challenge adjusting to life in the city, and then things went downhill when his Nan passed away while he was part way through his studies. He returned home for her tangi and to stay awhile and then found it very difficult to return to university. As he had grown up in the family home with his Nan, he had been particularly close to her and was hit hard by her passing. As he dealt with his loss, it ended up taking Monsul longer than the usual five years to complete his degree before he went on to complete his Masters in Architecture. He says many people do not realise how long the grieving process is for whānau, and how it can impact over a number of years. But at the same time, his Nan was an inspiration for him and his memory of her helped motivate him to keep going.

Monsul says coming from small town New Zealand also meant he had no professional networks or family connections in Auckland once he started to look for positions as a graduate. He studied alongside other students who had family members working in large firms around Auckland, while his parent’s roles back home were humble, his Mum worked at The Warehouse. He says the support of TupuToa was huge in terms of opportunities to meet up with the people who could help him with his career. His first internship was with Air New Zealand and he worked on their masterplan team. The work had a lot of relevance to his architecture studies. He says he was very grateful to have a role that was related to his profession rather than doing unrelated odd jobs.

Monsul says the support of TupuToa was also invaluable to  help him come out of his shell, as they understood where he was coming from culturally, but also encouraged him to value the diverse thinking he could contribute to an organisation and to not feel that he had to leave his culture at the door. Monsul says as a young Māori professional there are a wide range of challenges, not just in terms of the Pākehā world but also in relationship to other Māori and Pasifika who may not have the same connections to their culture. He says being always brought up to respect your elders no matter what, it is hard to express anything that might question their cultural competency and that can be even more difficult than dealing with the Pākehā world.

Monsul went on to an internship with the Auckland Design Office at Auckland Council and then the architecture firm, Jasmax, where he has now secured a full time role.

He is now immersed in working on big projects in Auckland such as the CRL underground rail project in central Auckland.  But he still has a dream to fulfill on some design work he completed for his thesis to commemorate important sites on the whenua on the East Coast.

He worked with an uncle who was both an artist and a historian who knew a lot of the whakapapa of the land to bring the stories together in design. The designs will represent the pūrākau stories of the past, and also the unseen realms such as Te Pō in structures with deliberately very little adornment, structures that will move with and on the whenua.